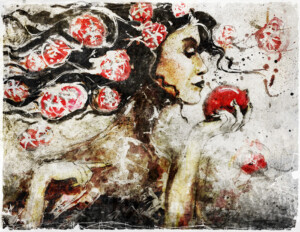 Once upon a time there was a very young, but headstrong girl – for the greater purpose of this tale we shall call her Justice.

Justice Tranquility was her name, subject.

Justice herself had only just begun to become aware of Her own powers as a budding Goddess.

She was very trusting and had a wonderfully loving soul, and wished to share her powers.

it happened eventually that she met another girl with whom she had a bond, and what seemed to be an understanding.

the two girls exchanged dreams, thoughts, feelings, and it naturally came about that these two girls would fit perfectly together.

They became as a team

Like hand in glove they just naturally fit each other.

Whereby everyone who comes around them just feels warm?

rumor had it that these two would experiment and even play games on others,

that they were so seamless others never truly knew which woman they were talking to.

they would dance around others minds in such a way that no-one really could see where one began and the other ended.

However, as Lady Justice’s reputation and power grew, likewise did Destiny’s, for this is the way of entrainment.

They were one, and had become seen as such throughout their world…