Finding Purpose In Being The Gift (by Michael Plutonia)

Home Finding Purpose In Being The Gift (by Michael Plutonia) 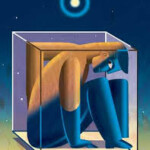 He sat there, knees together and tucked under his chin, in the box with the invisible walls, just waiting. Waiting and yearning for the special time of his life. No thoughts permeated his empty mind; there was no need for thought as he was all purpose. Life was now just a matter of when he would fulfill his purpose.
His life wasn’t always this way. Years ago, was it years or months? – time seemed to be irrelevant – he was multi-talented, with many desires that kept his mind busy. He had dreams of grandeur; dreams of being the best. After all, he was born to lead, born to have others work for him. However hard he worked, his dreams eluded him. He never truly took satisfaction in beating another and secretly felt guilty when watching the losing team scuffle off the field in defeat. Eventually, he realized that he took more joy in giving than in taking. The smile on the recipient’s face evoked a smile twice as big on his face. He could not understand why this was happening; how can he be the “best” when being the best always felt so empty?
Then, one slow day at work, while waiting for yet another client to give in to his usurious terms, he wandered into a YouTube category dedicated to hypnosis and female domination. Most of the videos were repetitive and centered around his wallet, yet there was one video that caught his eye, or should i say his mind? It was entitled The Ensconcing and it never mentioned money and it seemed to tell a story. So he watched and he watched and watched again. He went on to watch the next video, called The Gift, in the series and he watched that over and over again. This man who was always focused on himself now found his every thought dominated by thoughts of one incredible Woman: Goddess Cathy Venus. His mind, once filled with so much clutter, was being replaced with a singular purpose: to serve Goddess Cathy. Life was becoming easier and more focused. He made time each day and studied hard. He learned to be a nicer businessman, a nicer person. His terms were no longer usurious and instead, were designed to help his clients well being. He found himself to be living according to the teachings of his Goddess, accepting the reality that what She thinks is right, is right.
So now he sits, figuratively curled up in the interior of what can only be described as a gift box. He is there, invisible to others, waiting to fulfill his true purpose in life; to bring joy to his Goddess. For he has become the gift itself and he is, now and forever, the gift for Goddess Cathy. Trapped as he has become by Her mental control, he is caressed by Her loving thoughts flowing through his veins and he lay there, bound by ties stronger than titanium, waiting for the chance to bring joy to his Goddess; to be the Gift he was born to be.